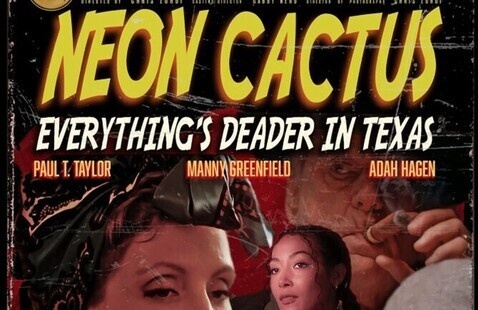 https://www.eventbrite.com/e/neon-cactus-film-by-chris-zuhdi-screening-by-shawnee-film-music-office-tickets-513152381587
View map Free Event
Add to calendar
Save to Google Calendar Save to iCal Save to Outlook

Join the director & cast of the new film Neon Cactus (filmed primarily in Shawnee, OK!) for a special screening following their video on demand release! Doors open at 7, film begins at 7:30 with Filmmaker Q&A to follow screening.

This screening is presented in partnership with the Shawnee Film & Music Office with support from Ronny Jones and Jones Theatres. Please use the "Get Tickets" link  above to reserve your free seat, as this event is likely to sell out, and don't forget to fill up with delicious snacks from Cinema Centre 8's concenssion before you take your seat!

Stanley Cooper is an east coast transplant to Texas. His new marriage to Maureen is on the rocks as she pines after her deceased husband, J.R. Both approach a shady character named Johnny Rocket -- owner of the Neon Cactus bar - to murder the other. Murder, romance, and unexpected comedy ensue in this fresh take on crime fiction.